An example of telephoto perspective in anime, courtesy of Shirobako

Back in The perspectives of the anicamera I said that I didn't think I'd ever seen telephoto perspective used in anime. It turns out that I'm wrong about that, as a recent shot in Shirobako showed me. Let's start with the actual shot itself: 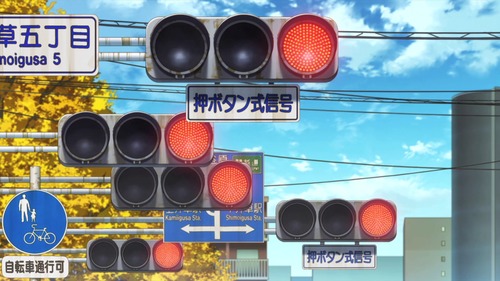 What we're seeing here is a classic telephoto perspective, where everything is stacked up on top of each other and there's very little distinction between close objects and further away ones. Notice, for instance, how little the size of the traffic lights changes at each step backwards into the scene, yet we're given the cue that they're not all at the same distance from us because they partially occlude each other. Even the features of the buildings in the background are relatively large and so look relatively close to us. This use of a stacked, dense perspective is deliberate and conscious on the part of the show. Nothing that the scene needs to show forces this view; in fact this shot is present almost entirely for its emotional effect (the only thing that matters for the flow of the scene is that we know the lights are red, to show why Miyamori stopped for a bit).

I suspect that this shot will feel familiar to you even if you haven't watched Shirobako. I'm pretty sure that this kind of compressed view into an urban distance cluttered with signs and wires and other parts of the city is actually not an uncommon shot and may even be common enough to be cliched. Certainly now that I've seen it here I'm sure I've also seen it before, undoubtedly going back a long way. It just didn't come to mind when I wrote the initial entry, partly because this effect is somewhat more subtle than a clearly exaggerated ultra wide angle view.

(I'm pretty sure that Neon Genesis Evangelion has similar shots and I'm sure that NGE didn't originate it. In a way it's such an obvious way of doing things if you want this effect on viewers.)