Bubuki Buranki shows that CG anime has a bright future

Let me admit something that I didn't really say at the time: neither Arpeggio of Blue Steel nor even Knights of Sidonia looked particularly great as anime shows. Arpeggio was serviceable; Sidonia did better, partly because it leaned into its particular gritty SF aesthetics, but that trick only works for a certain sort of show. Based on these shows, you would not be particularly enthused about the future of CG-based general anime.

The good news is that we don't have to worry about that now, because Bubuki Buranki shows that the future of CG anime today is actually pretty bright. I say this due to three things that Bubuki Buranki demonstrated over the course of its run.

First, it simply looks good. Sure, CG anime is not 2D anime so the two look somewhat different, but Bubuki Buranki's visuals go a lot beyond the merely serviceable. They are perfectly good and occasionally great, both in static screenshots and in motion (although the show undeniably improves over its run, with earlier episodes more clunky and less attractive than later ones). But merely looking good is just the minimum requirement in a visual medium like anime; it's table stakes. CG needs more than just that alone.

(You can see examples in, say, Evirus's Bubuki Buranki category and here. The latter shows some first-episode moments where the CG is, well, at least a bit obvious.)

Second, the show consistently exploited being in CG to do things that normal 2D shows either can't pull off at all or can only do sparingly. While the show went in for intricate character and costume designs that wouldn't have worked in 2D anime (cf), for me what really stands out is how expressive it made its characters. Even in ordinary situations, people were often making various sorts of faces at each other; over and over they actually had expressions (sometimes exaggerated ones because hey, this is anime).

(And more subtly all of this carried through into background characters, long shots, and other low-resolution situations. 2D anime often collapses into wacky faces when the animators have to draw characters at even moderate scales, much less small ones; Bubuki Buranki never did that I noticed. This is obviously much easier when you have CG models for everything and just have to make sure that nothing bad happens when you render them smaller.)

To be clear, this doesn't make Bubuki Buranki's CG better than normal 2D anime. It just means that the medium of CG has its own advantages for anime shows, which is nice; if we have to have CG shows (and all the evidence is that we're only going to see more of them), it's good that we're getting something for giving up 2D.

Third and perhaps most important, the show has convincingly demonstrated that it can combine traditional 2D exaggerations and other animation tricks with its CG. I'm not sure if these were actually CG renders styled differently or occasional moments of 2D drawings (or a combination of both), but however it was done the result was both seamless and anime. Here, have some screen shots to show what I mean. (An integrated mixture of exaggeration, for Domina, and normal CG, for Epizo, as Domina explains to Epizo what he should do here (full sized)) 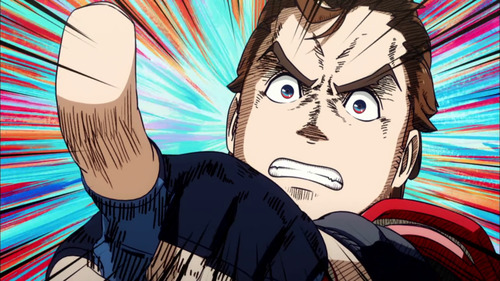 (Epizo's got it so he goes for the full version, taking over the frame with anime power (full sized))

That Bubuki Buranki can integrate these basic tricks from normal anime means (or at least implies) that CG shows don't have to do without all of the tools that classical anime has built up over the years. I don't think Bubuki Buranki used smears, for example, but I expect future CG shows will figure out how to do that where it fits in and adds impact. This means CG shows can and probably will still feel like normal anime shows, just ones that look somewhat different.

(This is a 12-days post, and may get me burned at the sakuga stake. Or maybe not.)

Here's a little bit of a scene that demonstrates speedlines, a classic hanging object gag, some faces, and Bubuki Buranki's ability to do comedy. As Matobai is getting grilled intensely by his comrades: 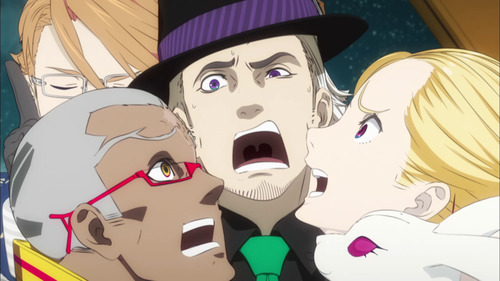 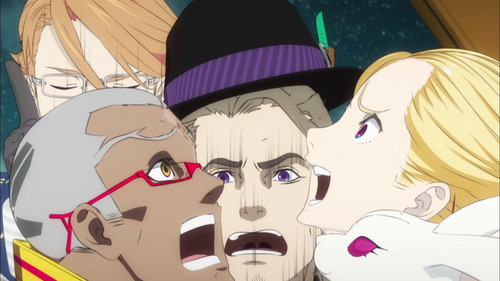 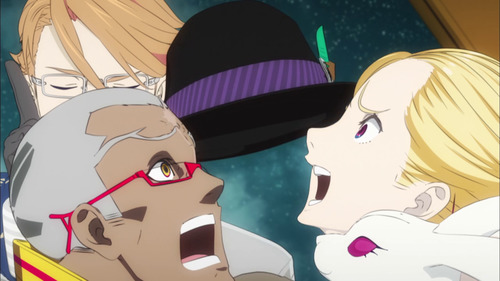 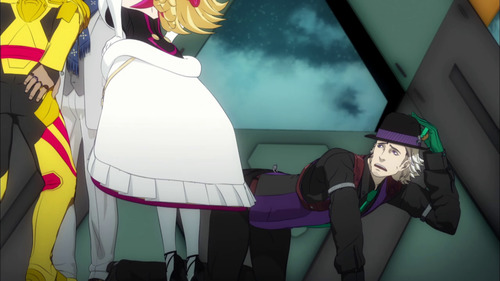 Apart from the CG look of everything, this could have come from quite a lot of normal shows. Which is unsurprising, since it is a classical gag sequence and it's executed basically classically. The only thing that a normal show might have done differently is use a smear when Matobai ducks out.