One of the things that Flip Flappers has been very good at from the start is communicating through visuals alone. One example of this is how much it has told us about Yayaka's character just through how she looks and her body language. Since this is visual communication, I have to show you pictures (well, screenshots). 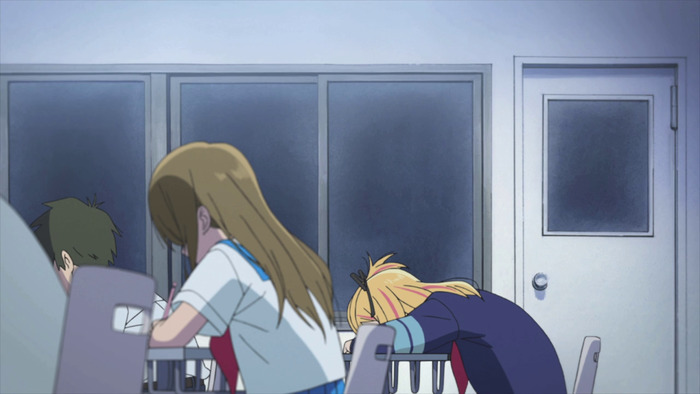 The first time we see Yayaka, she's sleeping on her desk in cram school while a mock test is going on. We get an immediate message here (and it contrasts with Cocona, who is dutifully writing the test), especially as earlier in the scene we saw an adult walking around watching over the students.

Flip Flappers is also using some subtle cinematography; we know we're supposed to pay attention to Yayaka because she's the most obvious thing in focus. The boy one desk in front of her is also in focus, which is realistic but not convenient for the show; the show pushes our eyes away from him partly by partially obscuring him and partly by making him much more muted in colours.

Next is the scene where Yayaka is actively introduced. Look at the variety of body language and expressions that she goes through here: 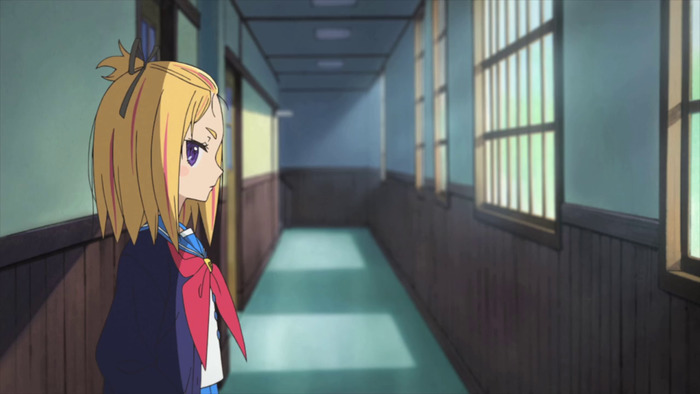 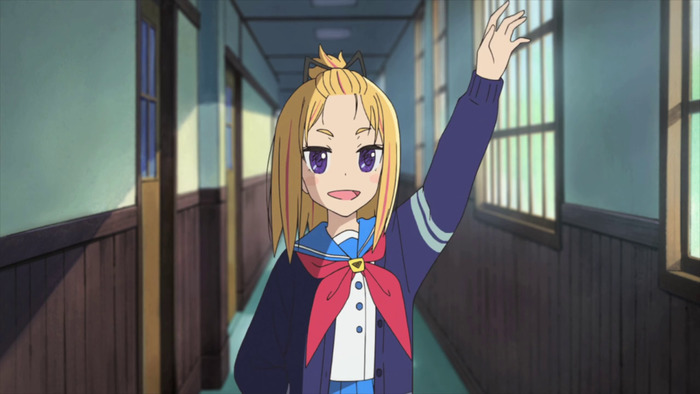 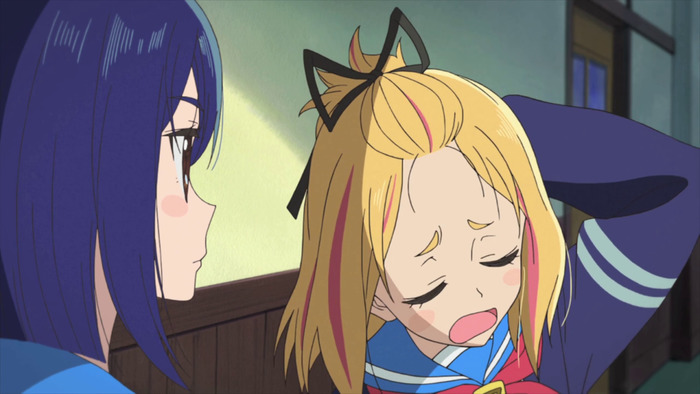 We see here that Yayaka ties back the front of her hair so it doesn't fall over her eyes rather than get it cut with bangs. (Cocona has bangs, although she may need to get them trimmed.) 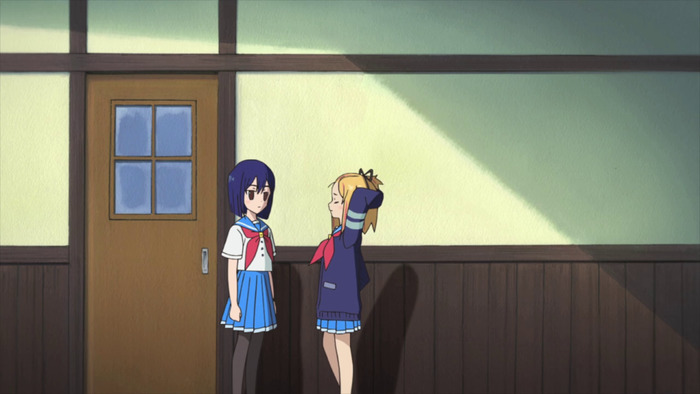 Unlike everyone else, Yayaka wears a sweater over her school uniform. Also notice the quite different body language between Cocona and Yayaka; Cocona is straight and proper, Yayaka is loose and casual and (apparently) open. But we've already seen a different side in her expression as she leaned against the wall waiting for Cocona.

In the nurse's office, Yayaka demonstrates more of her casual and loose body language: 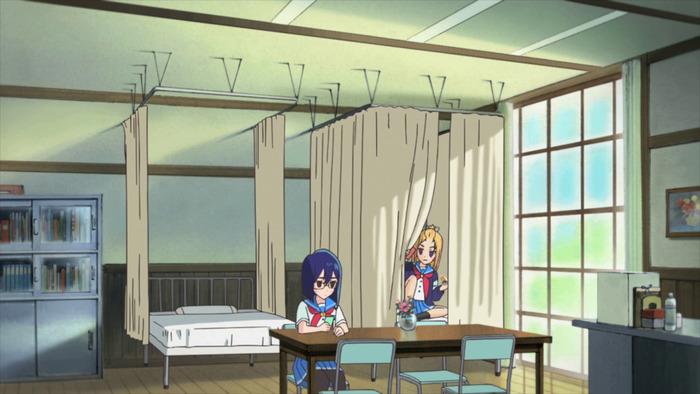 (Arguably Yayaka's concealment here was a subtle message from the show.) 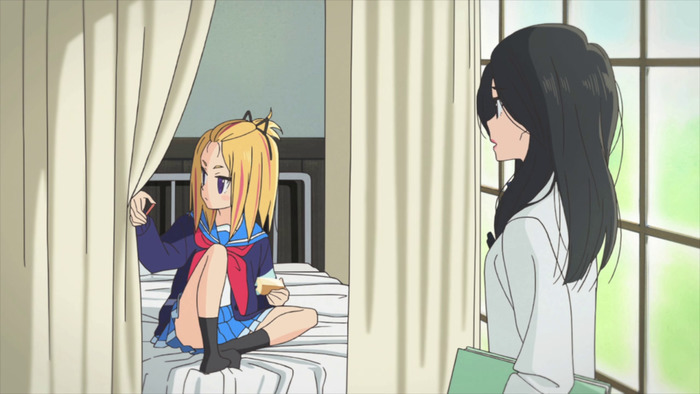 Then there's the start of episode two, where Yayaka is surprisingly waiting for Cocona outside her house and goes with her to school: 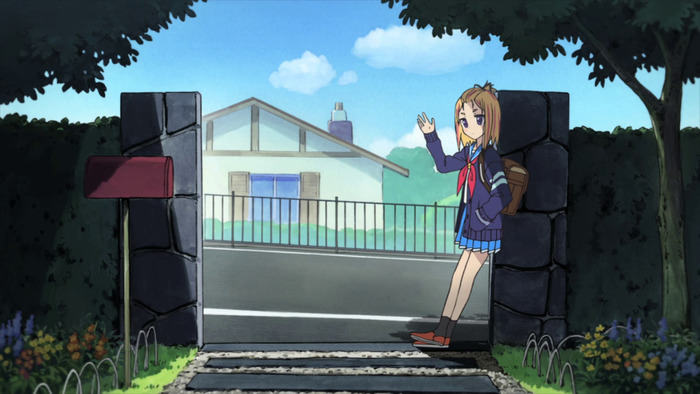 Yayaka's comfortably leaning up against the post (and thus on the grounds of Cocona's house) instead of standing straight on the sidewalk outside. 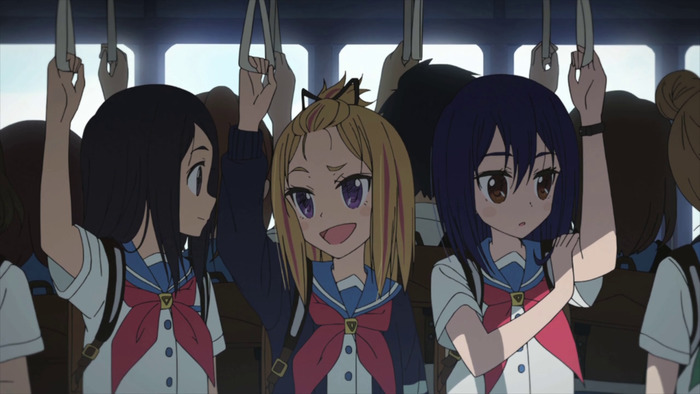 See? Yayaka can have a cheerful conversation with her schoolmates.

The subsequent encounter and confrontation with Papika gives Yayaka plenty of characterization through dialog, but still, look at how communicative her body language is: 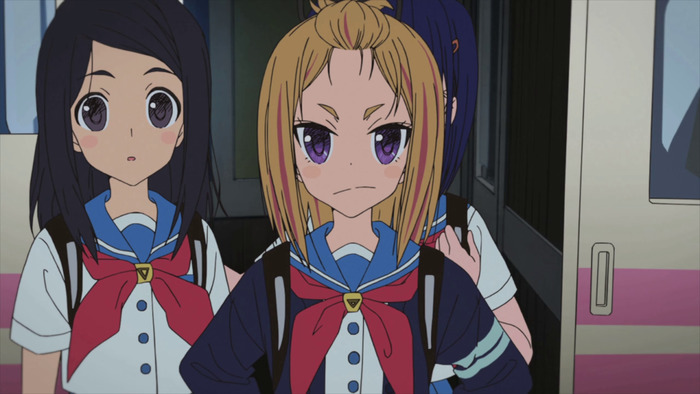 We can clearly see that Yayaka's not too enthused about Papika. 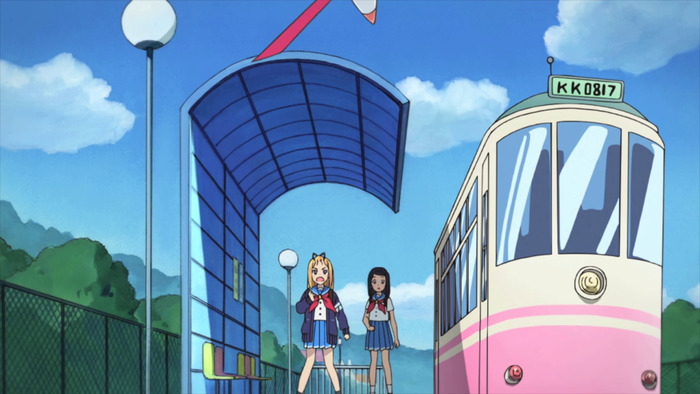 You can practically feel the 'hey!' here.

Then later at school, Cocona and Yayaka are talking when Papika arrives: 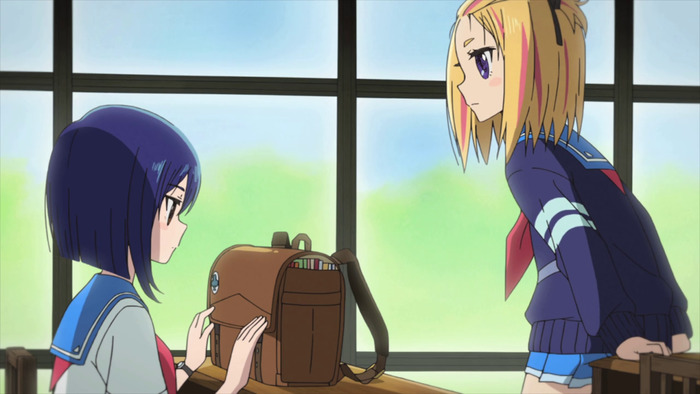 Yayaka isn't sitting down, unlike Cocona; she's a percher. This is useful for later in the scene but still, it says something. 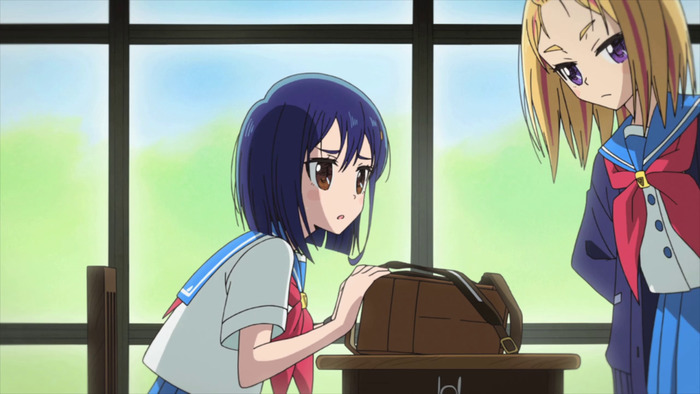 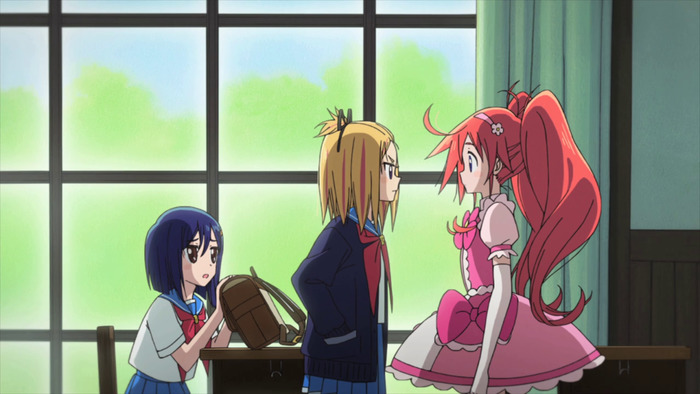 Later in the nurse's office, Yayaka sprawls around in her hideout, in contrast to Cocona: 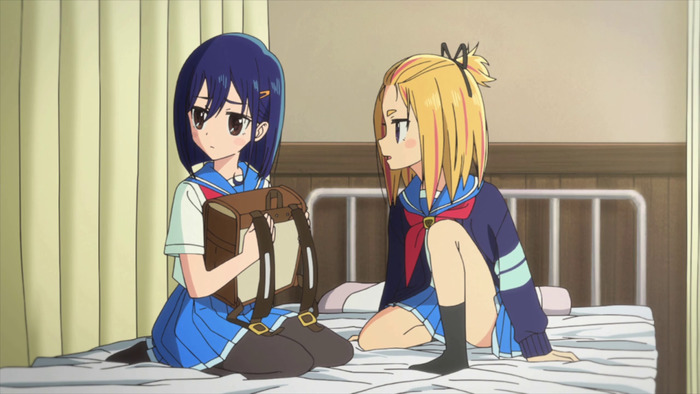 And I just have to include the very last we see of Yayaka before she reappears in episode 3, as she sees Cocona and Papika be sucked into Pure Illusion: 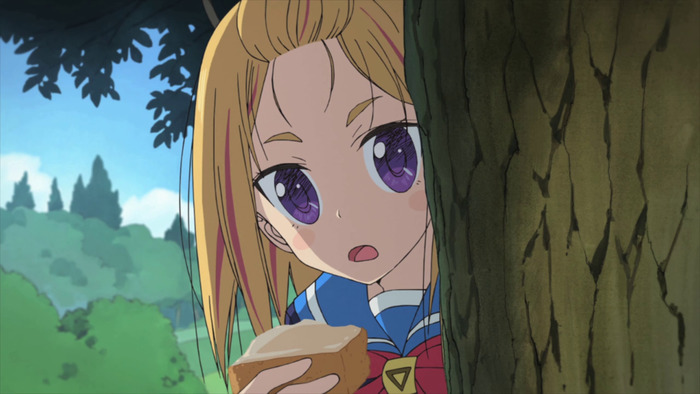 (To me this is an 'oh no' expression, not one of surprise or startlement.)

Even without hearing her dialog, I think you can clearly get a picture of Yayaka just through what Flip Flappers has shown us of her body language and expressions. We also get hints about various things which will start being relevant in episode 3 and onward.

The highlights in Yayaka's hair are also worth mentioning. They aren't glaringly prominent but they are clearly visible and they make her stand out in a show where almost everyone has natural hair. As we'll later see in a flashback to young Yayaka, they're also dyed, not natural. Arguably they pull her entire design together; even without anything else, they act to mark her, make her stand out, and make her clearly recognizable.

I do wonder if Yayaka's blond hair is intended to communicate something about her social position to a Japanese audience. In a normal setting, it would mark her as a foreigner and thus an outsider, which would go along with her quite different body language, which for lack of a better description is much less straight-laced than Cocona's body language and what little we see of their other schoolmates.

(This elaborates and carries through on a tweet of mine (and also).)